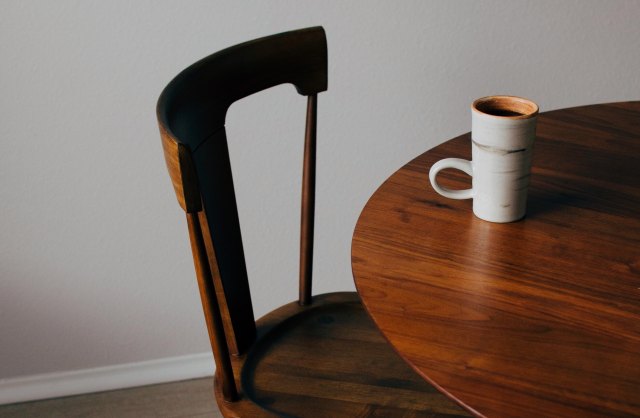 Most people who live in a home with a dining room furnish that space with a table and chairs. The theory (or so I’ve heard) is that whole families can gather around this table and eat meals — all at the same time.

In our house, in our dining room, it’s a different story.

For the past few years, my dining room has been dominated by a black hole. And it’s been ugly.  Its strong gravitational forces have tugged at everything that comes through the front door. Mail, packages, groceries, coats and purses, important papers, prescription drugs, all have been sucked into the black hole. While coats and purses — hovering on the fringes — have been safely retrieved and put in their proper places, other things have become irretrievably lost.

We’ve tried to live with it peaceably. On a typical day two family members can sit at one end of it and eat dinner. If a bit of effort is applied, a third can join in, but it takes a moonshot level of project management and manpower to get four or even five seated.

Today (no thanks to NASA ) I addressed that black hole and — Lowen behold — on the other side I found my dining room table. I managed this physics-defying miracle in part because I stopped buying stuff, even though NASA claimed this would have no effect:

Q. Do black holes die if they are not fed?

A. No, they just stay at the same mass until they slowly evaporate over trillions of years.

Frankly, my marriage could not have survived trillions of years — it was already teetering on the edge when our older daughter got engaged and we could barely squeeze her fiancé into our family-of-four configuration around the table during their holiday visit.

ORBIT OF MY WANTS

Here’s the truth, the hole truth, and nothing but the truth. I set out on this experiment specifically to stop spending money stupidly and dam the flow of stuff coming into my home. But like most things, there’s a ripple effect from that one action. In this case it’s a good one, because I could not have closed that black hole on my own.

In the past, although I steadily attended to putting away those objects that drifted into the black hole, they were replaced by new things that had entered the orbit of my wants and had become possessions.

My fatal flaw in the past has been not having a space for what I acquire. This forces me to play homeowner chess: move this piece to here to be able to move that piece to there, and if that piece won’t fit there and this piece can’t go here, put it on hold and leave it on the front hall floor or the dining room table for now. But like a bad chess player I was unwilling to sacrifice the lesser pieces to save the larger ones. In trying to keep everything, I was this close to losing the game — every single day.

Today, after steadily putting away the accretion of things that formed the dense core of the black hole, I got to the wooden table top. It was oak, and unevenly worn; it was obvious which side we ate on and which side had been covered by so much clutter that it had served as a protective shield.

I sent a photo of the clean, bare tabletop to my older daughter and texted:

Come back and visit! I finally did it!

WHOSE HOUSE DID YOU BREAK INTO!?!?!

It did. It does. I’m keeping it that way. Easy said, easy done since nothing’s coming into the house that isn’t essential.

If I’d made a New Year’s resolution to clear my dining room table of clutter I wouldn’t have kept that promise; I would have thwarted myself again and again.

You know how sometimes you can’t see stars when you stare at them directly, but you can when you look at them obliquely? That’s what this whole thing is turning out to be.

I didn’t set out to address anything beyond my spending habits and shopping problem, but the ripple effect continues. May I continue to be open to its growing force.

Photo by Ryan Riggins on Unsplash